Not Your Model Minority: The Art and Activism of Renee Tajima Peña 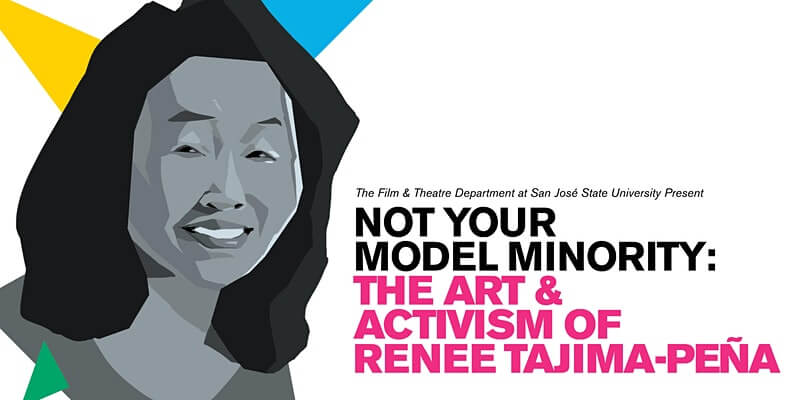 For nearly 30 years, documentary filmmaker, producer, and activist Renee Tajima-Peña has chronicled movements for racial and reproductive justice in the United States. Her films are part of a larger Asian American alternative cinema movement – a movement committed to challenging the myth of Asian Americans as a “model minority” by creating and distributing media focused on social justice, intersectionality, and coalition building among Asian, Black, and Latinx communities.

Join South Bay scholars, artists, and activists for a series of conversations with Renee Tajima-Peña on her career-defining films — Who Killed Vincent Chin (1987), My America…Or, Honk If You Love Buddha (1997), No Mas Bebés (2015), and the 5 part Asian Americans (2020) series for PBS.

*Film screenings will precede each Q & A event on the Thursday (6 to 8 pm) prior to the event, except for No Más Bebés, which will screen on Monday, April 5th, 6-8 pm.

Live captioning will be provided for each Q & A. Please email any additional access needs to apryl.berney@sjsu.edu. This event is free and open to all.

Events in this retrospective operate with an understanding that racism, sexism, classism, ableism, and homophobia exist. The purpose of this retrospective is not to debate the validity of feminism, social justice, anti-Asian violence, or anti-blackness. Instead, the goal is to push socially progressive conversations further. Any attempt to silence or harass participants or guests will result in your access to events in the retrospective being suspended. Any questions, please contact Apryl Berney at apryl.berney@sjsu.edu.

Rosanna Alvarez is a consultant, educator, and multidisciplinary creative entrepreneur. She is fiercely committed to thriving in authenticity, and her life’s work is grounded in her mission to embrace personal power through creative inspiration. As an educator, she has taught at the high school and college level, while also offering a range of professional development workshops and consulting services in partnership with various organizations and individuals throughout Santa Clara County. Her love of story-telling and amplifying the collective power of community also led to her becoming the co-founder and editor of Eastside Magazine, which aims to highlight the deeply rooted history, cultural vibrancy, and assets of the East San José community. She teaches Women’s Studies at De Anza College and Chicana/o Studies at San José State University. She is also a native of East San José, an outspoken and art-loving entrepreneurial Chicana, the first-born of nine siblings, a mother of three fierce guerreras (little warriors), and a trucker’s wife.

Chesa Caparas (she/they) is faculty in English and Asian American Studies at De Anza College, where she teaches in the IMPACT AAPI and FLOW Hip-Hop Learning Communities. She is also the Faculty Coordinator for the Jean Miller Resource Room for Women, Gender, and Sexuality. In both her classes and her community work, she uses an intersectional feminist framework to resist systems of inequality. She has a BA and MA in Modern Literature from the University of California, Santa Cruz. She has also been awarded a Fulbright Scholarship to the Philippines where she plans to research discourses of digital literacy.

Dr. Soma de Bourbon, whose heritage is Blackfeet and French, is an Assistant Professor of Sociology at San José State University, the faculty advisor to the Native American Student Organization and the Justice for Gregory Johnson student organization. Dr. de Bourbon is a member of the Ethnic Studies Collaborative and part of the Core Implementation Team for AB 1460 at SJSU. She is a Council Member of the American Indian Alliance and a member of the Red Earth Women’s Society. Her scholarship is interdisciplinary and focuses on the genealogy of U.S. property interests in Indigenous people from enslavement to their overrepresentation in detention centers, reproductive control programs, and child welfare systems.

Dr. Susana Gallardo is a Chicana educator, researcher, networker, and mom. She has taught Women’s, Gender & Sexuality Studies at SJSU since 2005, and taught Chicana/o & Latina/o Studies at various other Bay Area universities. Originally from SoCal, Susana fell in love with San Jose, its people, and its history in the 90s while doing fieldwork for her Stanford dissertation in Religious Studies. Her latest publication is a chapter about the women of San Jose’s Guadalupe Church in Chicana Movidas: New Narratives of Activism and Feminism in the Movement Era (UTexas, 2018). Susana is the original webjefa of the 1996 Chicanas.com and a techie consultant to several Chicana/o academic orgs including NACCS and MALCS. She and her partner Ken are also co-leaders of the Gardner/Hoover Latina Girl Scout Troop #62725 so she can hook you up with some cookies (until March 14).

Mae Lee, Ph. D. is a teacher at heart. She grapples with the practice of good teaching, laboring to create heartening experiences so that students believe they love to learn. For nearly twenty years, Mae Lee has taught comparative studies in race and ethnicity, and Asian American Studies at a two-year public community college in Cupertino, CA. Currently, she serves as Chair of Asian American and Asian Studies, and as faculty of Intercultural Studies at De Anza College.

Lindsey Leong aka HELLA famous is an Asian American spoken word artist, host, curator and activist born and raised in the Bay Area. She grew from a shy kid who painted and love hip hop and R&B to a youth activist and spoken word artist. She attended San Jose City College and San Jose State where she obtained her bachelor’s degree in Social Science with a minor in Asian American studies. Her biggest influence is Tupac Shakur but also include Brandy, Mary J. Blige, Common, Andre Harrell, Yuri Kochiyama, Grace Lee Boggs, Martin Luther King Jr. and Frida Khalo, and Jay Z.

Dr. Melissa-Ann Nievera-Lozano believes in storytelling as healing. She is a 2nd generation queer Filipina American. As an ethnic studies professor at Evergreen Valley College, and the co-editor of The Pilipinx Radical Imagination Reader (2018), her work draws from womxn-of-color radical thought and Buddhist philosophy to address intersectional struggles of anti-blackness, classism, and cisheteropatriarchy impacting our lives across families and generations.

Joanne L. Rondilla, Ph.D. is an assistant professor in Sociology and Interdisciplinary Studies and Asian American Studies at San Jose State University. She is an award-winning educator and is the co-author of Is Lighter Better?: Skin Tone Discrimination Among Asian Americans (2007; with Paul Spickard) and co-editor of Red & Yellow, Black & Brown: Decentering Whiteness in Mixed Race Studies (2017; with Rudy Guevarra and Paul Spickard). Her research interests include colorism and media representations.

About Image: The retrospective’s artwork and design are by Cassandra Chen, SJSU 21.

Funded by an Artistic Excellence Grant from the College of Humanities and the Arts at SJSU. 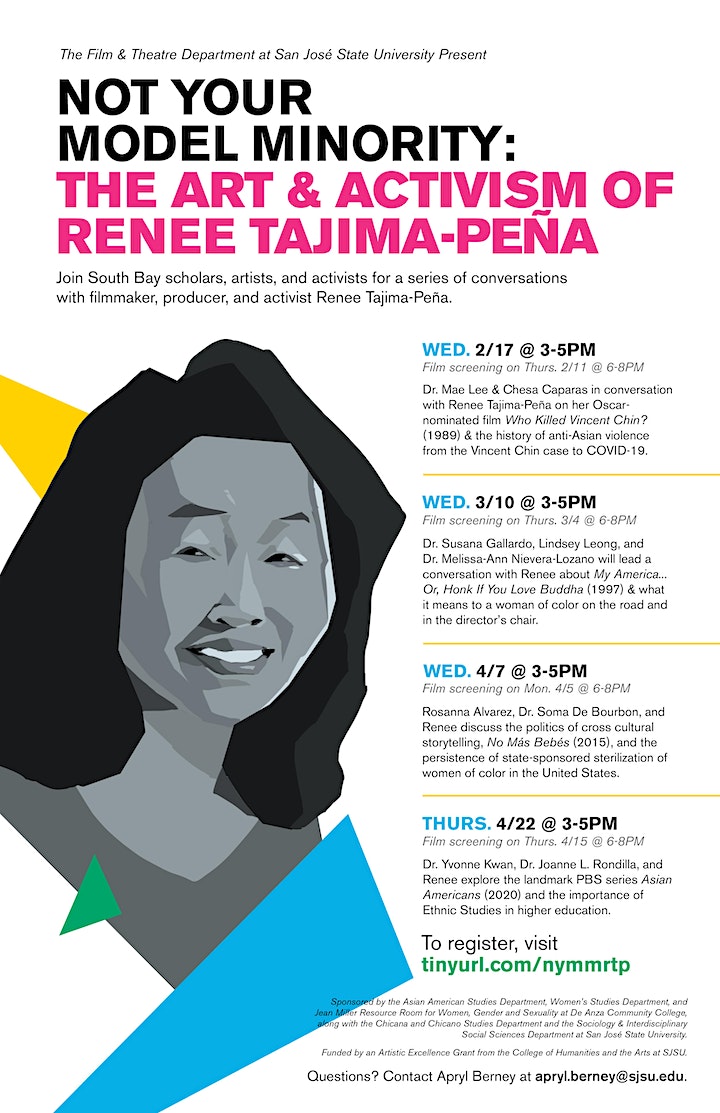